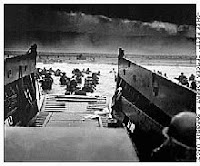 Good friend Joe Dively recently returned from Normandy with his family, after first visiting the site of D-Day with his father and uncle, both of whom fought their way through the beaches of Normandy. If I ever visit France, it will be one of the sites that I want to visit.
Joe told me, “On this trip, we learned the incredible story of tiny Bedford, VA which lost nineteen sons that day.” 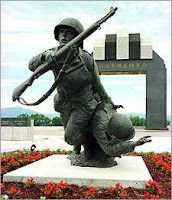 Bedford, VA, sits near the Blue Ridge Mountains. Today the town of 6,299 is site of the National D-Day Memorial, but back in the early 1940s it was half that size. Thirty-four young men from Bedford signed up for Company A of the 116th Infantry Regiment, the first wave to hit the beaches of Normandy. Nineteen of them died within minutes of landing and another three died only a few days later.
One of those who survived was Roy Stevens, who lost his twin brother in the invasion. Here is his story before he passed away last year.

Alex Kershaw wrote a best seller book of their story, “The Bedford Boys,” which I’ve just started reading. Today most of the heroes from that heroic invasion like Stevens are passing on. Hopefully their sacrifices will live on through the memorial in Bedford. I hope to visit it soon in my travels.
Posted by BoomtownUSA at 5:50 AM