Several people have given me subscriptions to their hometown newspapers, which I really enjoy reading. It is great learning of new things going on in small towns all over this great country of ours. One of those is the Perkins, OK Journal. As a result, I decided to visit Perkins (population 2,272) on my way from Duncan, OK to Stillwater, OK.

Local developer Harland Wells and new city manager Peter Seikel agreed to show me around Perkins early in the morning. Perkins is going through a housing boom, due to its proximity to Stillwater. The opening of a new four lane highway to Stillwater in 2006 will keep that momentum growing.

One of the couples who moved to Perkins is Mike & Martha Larsen who wanted a more rural setting than Oklahoma City. Martha’s sorority sister lived in the town, doing sculptures and enticed them to also move to Perkins. Mike Larsen is a renowned Chickasaw painter and was recently chosen as the fifteenth Oklahoman to be named the Oklahoman of the Year. His painting of a sunrise over the Cimarron River near his home was launched as the Centennial stamp for Oklahoma’s centennial in 2007 the day before I arrived. The Larsen’s opened their studio for my early morning visit.

An advertisement from the Perkins Community Foundation really caught my eye in the Perkins Journal. It showed a picture of the local fire department fighting a fire in the community with this caption,

“If you have a fire, you need help and you need it quickly. Every time you shop in Perkins three cents of every dollar goes to keep our city government running—including our Fire Department. When you spend your dollars elsewhere, your money goes to equip somebody else’s Fire Department. Be smart. Shop Perkins first. It helps you and it helps your neighbors.”

It is one of the best explanations of why it is important to shop locally. You might use it yourself. 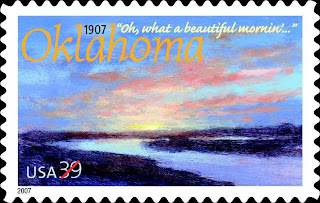 Great example for a "shop local" campaign. Thanks for sharing it!