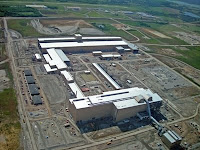 The same day we were selling the spec building I told you about yesterday in Greenville, IL, we were in Columbus, MS (population 25,944) making an announcement for a new 100,000 sf (expandable to 200,000) spec building there.
In my remarks at the event I told them of having gotten a chance to tour over 300 towns in 44 states in the past four years, but have yet to find a town that is going through the job creating spurt that Columbus is enjoying. It is incredible!
As I’ve reported on this blog several times in the past few years, Columbus developed not one but two mega-sites that have resulted in both a new steel mill and also PACCAR’s new U. S. engine plant. PACCAR is better known for their two main truck brands: Peterbilt and Kenworth. In addition Columbus has recruited in several aerospace companies, including American Eurocopter, Aurora Flight Sciences and Stark Aerospace, which have all moved to the town with hundreds of new jobs in the past three years. Total investment over the past five years has been $3.5 billion, creating over 3,500 jobs, most of which will be in the $50,000 to $75,000 range. They’ve been on quite a roll!
And, they’ve got more projects in the works with both Heidtman Steel and New Process Steel building adjacent to the new SeverCorr Steel Mill which is itself in the initial stages of a new expansion. The headline in the local paper on the day we arrived in Columbus was SeverCorr Phase II, which would double their capacity to over 3 million tons/year after an additional investment of $623 million.

Joe Max Higgins, the dynamo head of ED, told me “We’ve got at least $500 to $700 million in new projects that will get started this year.”
I told him that there are whole states that I’ve visited that would like to have accomplished in last decade what he has done in the past five years!
And, Joe Max isn’t standing still. He continues to option more land for new projects, is working on expansions to the water and sewer systems and promotes the advantages of manufacturing in Columbus, MS.
Cliff Kjelgaard, one of the PACCAR executives who was at our spec building announcement told me about their experience, “We’re now making castings in Mexico and the U. S. that we used to bring in from China. Their costs and the freight from China to here, now make it much more cost competitive in the U. S. We’re in fact exporting our engines over to China right now, where we have the top engine for their bus fleets.”
Kjelgaard joined PACCAR in 1995 when they had $3 billion in sales. Last year they were over $17 billion with 65% of that in overseas markets. And, they’ve enjoyed 69 straight years of profitability!
Joe Max is by far the most colorful ED exec that you will run into. We’ve known him since his days in Paragould, AR when we were doing a site search.
My favorite story that he told on himself occurred on a recent Harley motorcycle ride. He told me, “I was filling it up with gas out by the new steel mill and some guy walked up to me and asked, ‘Hey, are you?....’ I thought that he was going to ask, ‘Are you the guy who was single handedly responsible for bringing in this plant over here?’ I sucked in my gut, puffed out my chest and said, YES? He repeated, ‘Are you local?’ When I told him yes, he handed me a stack of business cards for his new Tit For Tat Tattoo Parlor and asked if I could hand them out for him.”
And, that’s why we’re in Columbus, MS building a new spec building.
Posted by BoomtownUSA at 6:17 AM