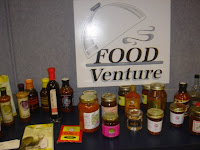 One of the more amazing stops on my tour of Madison, IN was the Food Venture, a 5,200 sf shared-use commercial kitchen and food incubator. The spotless facility appeared to me to have everything that a fledgling food entrepreneur could ever need to be able to produce their products.
Corey Murphy explained to me, “This is one of only 15 such facilities in the country. We’ve got 45 companies and individuals who are using it. Some of the better known ones are Nancy Grooms who produces her Ladder 51 Flame-Broiled Wings here, the Millers and their seven daughters who produce their Amish bread and most recently Mr. Yoshi who just got his special Japanese sauce into Costco. He produced 7,000 bottles just to get started with Costco.” 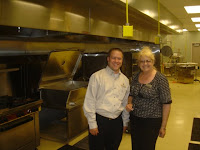 One disappointment was that none of the products are available at one spot in town. I would have been a buyer who would have experimented with several. Hint to local merchants: Make a point of prominently displaying and selling locally produced products.
With the trend toward local foods and also niche products, having a facility like the Food Venture is a big plus.

Posted by BoomtownUSA at 4:48 AM