I was most excited to see New Zealand when we were planning our round the world trip. I’d heard so much about the country and wanted to see for myself why it is one of the most entrepreneurial countries in the developed world.

It was a VERY long day when we flew from Siem Reap, Cambodia to Bangkok, Thailand where we changed planes to fly overnight to Sydney, Australia. We decided to break up the day a bit, doing a tour of Sydney Harbor before we flew onto Auckland, New Zealand. We had debated adding Australia to our tour plans but decided to make it a separate tour at sometime in the future when we would have more time to properly tour the country.

The Sydney Harbor is the second largest natural harbor in the world and our three hour tour of it from a tour boat was very interesting. The Opera House, Harbor Bridge and other architectural wonders make Sydney a delight. 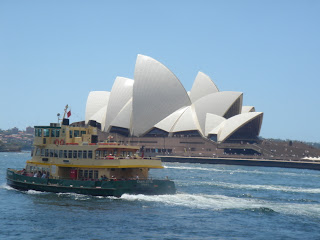 I learned on the three hour flight from Sydney to Auckland, New Zealand that it is closer from London to Moscow than from Australia to New Zealand. There is a lot of water between the two.

New Zealand stretches from the 34th to 47th parallels (1,000 miles from north to south), divided into two major islands. The country covers 100,000 square miles, about the size of Colorado, but with 9,000 miles of shoreline. Auckland and 2.5 million out of 3.5 million total residents occupy the north island where we landed. We had planned to drive our rental car down to the southern one, which is supposedly the more majestic but learned that you can’t easily ship a car between the two islands. Instead you leave your rental car on the north island and pick up a different car on the south one. Unfortunately, when we made the inquiry we learned that there were no rental cars available on the south island. So we made the most of touring as much of the north island as we could.

The rental car incident was our first indication that New Zealand didn’t quite have this tourism thing quite figured out, something we would see during our trip. We learned that tourism is not generally considered a thing that decent people do in NZ. Driving around the country was a bit of time warp, reminding us of the USA in the 60s or 70s. The roads were very well marked but driving was very slow and people generally obey the top speed limit of 100 km/hour (60 mph), usually taking twice the time we had expected to drive between locations. Popular music was from the 70s. It was just kind of weird.

But, we found the scenery to be incredibly diversified and the people the most friendly we had found on our entire trip. Numerous times we had people go way out of their way to help us solve an issue that was major for us and a time consumer for them. We also found their roads very well marked with the best directional signs within towns that I’ve seen anywhere.

Our first stop was in the town of Rotorua, which didn’t become an official town until 1960. It sits above a fissure in the earth’s plates, resulting in a number of geysers, hot springs and boiling pools. The town has turned these natural assets into a tourist draw and a number of local farmers and other entrepreneurs have established their own special attractions. We saw a CAT tractor demonstration that showed how NZ had cleared its bush land, a sheep farm, native dance area, etc. 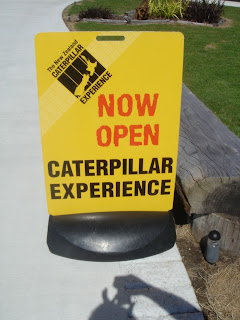 NZ has the highest propensity of entrepreneurism in the developed world and was one of the reasons I had wanted to visit. More on that phenomenon in future posts.

Taupo was where we spent the night. It is a very nice town on the banks of the largest natural lake in NZ, which was formed by a volcano crater many, many years ago. There is still volcano activity in the area, with the most recent eruption taking place about five years ago. The mate who checked us into the hotel asked if we had ever tasted NZ lamb, which we told we had. He insisted on giving us three of his own lamb chops, to prove to us how good it was. That was typical of the friendliness we found in the entire country.

A very unique town we visited was Napier, a seaside town that could have come out of 1960s. It was totally destroyed by a devastating earthquake on February 3, 1931 and was built as an Art Deco town. We learned that it has the second largest number of Art Deco buildings in the world, second only to Miami Beach. 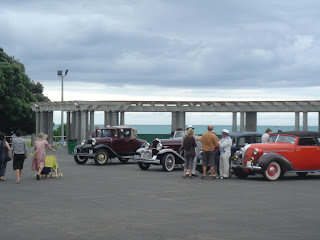 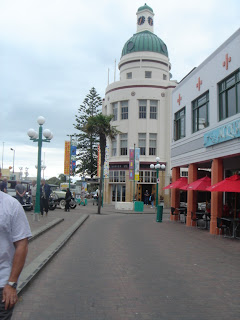 The capitol of New Zealand was moved to Wellington in 1865 from Auckland when there were fears that the southern island was planning to set up a separate country. Wellington sits at the southern edge of the northern island, a three hour ferry ride from the southern one but one that has to cross the roaring 40s parallel which can make for some very rough seas. Most people fly.

It has suffered through seven major earthquakes in the past 150 years with the last major one in 1942. Available hotel rooms were non-existent when we pulled into town. In driving around it appeared that my hometown of 12,000 has more hotel rooms than what we saw in Wellington.

The drive back up north from the south turned into a very long day when we couldn’t find ANY empty rooms within a 50 mile radius of Waihi, an old gold mining town, despite numerous calls from a very kind hotel proprietress who couldn’t believe that we had driven from Wellington in less than a day.

Betinha’s response was, “You’ve never ridden with my husband.”

The slow roads and low speed limit started to wear on me after a few days. When we passed Waiouru, one of the highest elevation towns in NZ the road opened up into a dry, dusty plateau. Traffic was sparse and we finally had a flat downward stretch of road. On the horizon I spotted the flashing lights of a police car that had pulled over an unfortunate soul. Traffic tickets are major issues in NZ and the guide book warned us numerous times of the potential fines from excessive speed, something that Betinha invariably read to me as the speedometer started to inch up.

“That’s got to be the only cop around here. We should be able to make up some time,” I relayed to Betinha as she again read me the speeding warning, “No leeway is given to the speed limit anywhere at anytime. You will get stopped doing 62 in a 60 zone. Tickets can be in the hundreds of dollars. SLOW DOWN!”

I just hate it when she is right, but I didn’t know it as I sped ahead flashing my headlights at the line of cars headed my way. I stopped my signaling at the fourth car, when I noticed that it had two small bubbles on the top. Those small bubbles started flashing red and blue before long and the driver started to brake to turn around on the highway. 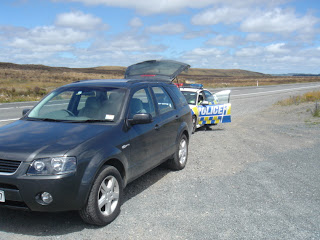 I didn’t think that he would buy that I was celebrating a flat, straight highway so I admitted that I was trying to warn my fellow drivers of police action up ahead, hoping that this didn’t compound my already precarious position. Evidently, either my honesty or sad puppy dog look resonated with him. We had a nice conversation about speed limits in NZ compared to the USA, I spoke of the wonders we had seen in NZ and he relayed to me that he didn’t want to discourage tourism in his country. He informed me he was going to write me up for only doing 110 (66 mph), which resulted in a fine of NZ$30 (US$21). I slowed down for a few miles as Betinha expressed her outrage at my low fine.

Russell was a lovely small town right on the water. It was New Zealand’s first capital before moving to Auckland and we stayed in the tiny Duke of Malborough Hotel right on the waterfront. The hotel dates from 1827 and holds the oldest continuous liquor license in the country from 1840. The town reeks of charm and history from that time. 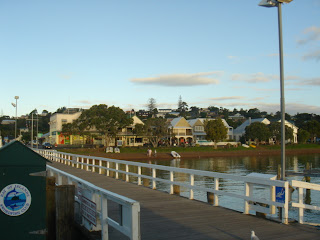 At the time it was known as the wicked city because of the various incidents that occurred when the numerous sailing ships anchored in the bay, much to the consternation of the English missionaries. One native Maori said of the missionaries, “They have faces so solemn that they looked like a relative had just been eaten.” Probably a big concern in those days!

The most infamous incident occurred in February, 1830 when two Maori girls fell for the same whaling captain. Their cat fight soon turned into a full scale war between their competing tribes, resulting in over 100 warriors killed on the beach at Russell in the first day and 40 on the second day, before those solemn faced missionaries intervened.

New Zealanders have always had a very close relationship with Great Britain. In both WWI and WWII the country declared war within minutes of Britain’s announcement. Many third generation New Zealanders still considered Britain home. New Zealanders were devastated when England joined the EU and they had to fill out custom forms just like any other foreigner. The country appears to be redefining itself as a leader in the region.

Auckland is a wonderful waterfront city of 1 million. The city is sailing mad with an estimated 80,000 boats or 1 for every 12 people in the city.

I’ll have blogs specifically on some interviews and thoughts about NZ as a model that could be used in the USA and other places.

In leaving NZ we met a large group of travelers who had made two failed attempts to take off for Los Angeles. Both times, about an hour out of Auckland, the pilot found a problem with their fire detection system and turned around, dumping over 150,000 gallons of jet fuel into the ocean before landing. Glad I didn’t have to pay that bill!

We found Fiji to be like many islands. It was a beautiful hotel on a nice beach. We chilled most of the time at the hotel, taking one day tour to some nearby places. I knew it was time for us to head home when Betinha ordered a drink with an umbrella in it.

Fiji gained independence in 1970 and has had four coups, the most recent of which was in December. Every Fijian we spoke with applauded the coup feeling that the elected government was very corrupt and that they had let local security deteriorate greatly.

Fiji has a unique political structure with about half of the population native Fijians who own 90% of the property on the islands and half immigrant Indians who are the merchants and control most of the economy. The land is controlled by loosely defined tribes that flows through the father’s side and are only allowed to lease out the land. 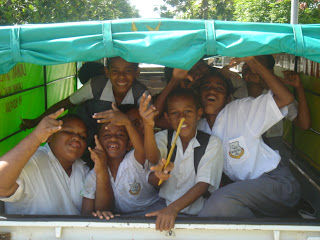 Fiji’s economy was not impressive, especially the agricultural part that we saw. There was a sharp contrast between Fiji and neighboring New Zealand.

Today is Betinha’s birthday, but with a twist. We celebrated it yesterday in Fiji, leaving the country at 11 pm. Shortly out of Fiji we passed the International Date Line and landed on the same day at 1 pm in Los Angles. I’m trying to see if she wants to count it as a special birthday of 48 hours or if we should count it as two birthdays. The thrown shoe just missed hitting me. We’ll call it a special birthday.

I’ll be doing some blogs this next week on some final thoughts, summary of the trip and a couple of interviews with some interesting people. 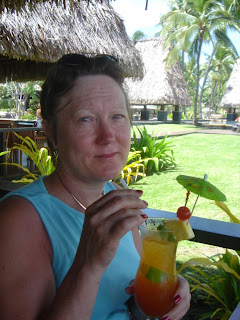 Posted by BoomtownUSA at 5:02 AM