We had a great flight from Madrid to Athens, with clear skies which allowed us to see numerous Mediterranean islands, arriving on time. We were shocked that we didn’t have to even go through any customs and since we were only carrying a backpack and a small roller board suitcase we quickly whisked to the Hertz counter for our car. The Hertz directions to both our car and hotel were vague at best, but we set out for our hotel in downtown Athens in a small Hyundai that was already fast idling. Not a great start!

Our supposed ten minute drive turned into a two hour adventure, including me slamming on the brakes once and shouting, “Listen if you can’t say something positive about this experience, then just be quiet!” It was a quiet, but long ride after that outburst, other than a few shrieks when I tried to enter an interstate going in the wrong direction. That little Hyundai never went so fast in reverse!

To say that the Greece alphabet is difficult to understand is an understatement. It put real meaning into the old saying, “It’s Greek to me!”

To get me to admit that I stopped to ask directions at least eight times shows you how concerned I was. Even though most of the locals spoke English, they could only generally point me in the right direction, not exactly the most encouraging thing that you want to hear when you are seriously lost.

When we finally showed up at the hotel, the bellman was shocked that we had come with a car, “We don’t have a garage but you can park it here for two hours.”

Great! The hotel won’t park my car, the signs are written in Greek and Betinha has just informed me that she is not getting back into the car. However, she let me know that I was welcome to drive out in the country by myself, as we had planned but she wanted to pin a sign on my coat (like when you were in kindergarten) that had my name and the phone number of the hotel so she could know where to come find me. Evidently, trying to enter the interstate going the wrong way was a bit traumatic.

So I surrendered and agreed to take the car to a nearby Hertz agency, taking the bellboy with me. He got lost, which made me feel better. However, we were gone long enough for me to learn that he was 28, single, had studied English for seven years and lived in a small town about 30 miles from Athens. Their main local company went bankrupt about five years ago and so most of the locals like him drove to Athens for work. I could go on with more information because we were lost for sometime.

We walked today to the famous spots in and around downtown Athens. We climbed up to the top of the Acropolis; saw their first Olympic stadium, Temple of Zeus and other really old sites. Incredible what they could build back then! 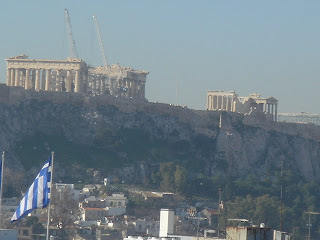 At the outdoor market I must have looked like an easy mark because there were about a half dozen little Greek ladies, who appeared to be in their 70s trying to sell me table cloths. Do I look like a table cloth buyer to any of you?

Up to now all I’ve said is, “Thank you. Very nice. I’m not interested. Thank you.”

But, by now we have the entire table cloth open, blowing in the market air. Thank goodness Betinha didn’t have the camera. When I wouldn’t buy it for 15 euros, the old lady finally gave up on me, trying to find someone else. It was kind of cute the first time, but got a bit old by the sixth.


DAY TWO AND THREE: We went on a tour of three Greek Islands, which was an all day affair and extremely interesting. First stop was Hydra, an island of 3,000 that doesn’t allow any wheeled vehicles of any type including cars, motorbikes and bicycles. Everything was hauled with little burros. They did allow hand pulled utility carts for hauling construction material, but after walking the steep hills of the town, it would have been a small consolation to be able to use one of those. 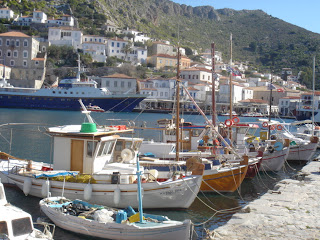 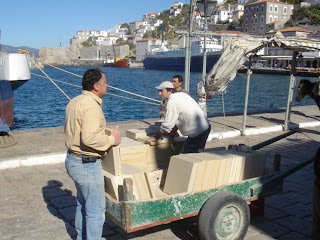 Second stop was Poros which was what I had in my mind as a typical Greek fishing village. It was very quaint with some wonderful views from the clock tower that was about 200 steps up.

The final island (15,000 people on 85 sq. km) was the most interesting, the island of Aegina which was divided into three parts: Modern, Byzantine and Ancient. In the modern portion olive and pistachio production was a major part of the economy. We saw pistachio trees planted in people’s front lawns and I even have one that they put a coke machine under. 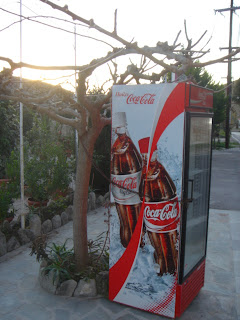 The Byzantine and Ancient sections were defined by temples that had been built. The Ancient one pre-dates the Acropolis in about 600 BC.

We got awakened the next morning with glorious news that we were the winners of the government’s survey, which Betinha took very well for early in the morning. But first let me give you some background of how we entered this competition. We were wondering around in the open square in front of our hotel. We’re pretty sure that we had on our “Dumb tourist” attire because we were quickly approached by a very nice young man who asked if we wouldn’t mind taking a survey about Greek tourism.

Here was my chance to let them have it about their lousy signs! “Sure, we’d love to fill out your survey.”

He relayed to us, “Oh thank you so much. For doing this you will be entered into a drawing for one of three prizes. Ninety to ninety-five percent of the people win a free tour of Athens. But second place is two nights and three days on a Greek Island and first prize is seven nights at an exclusive resort here in Greece.”

We took the survey and I very diplomatically relayed to them why “it’s Greek to me” was not what you wanted tourists to be thinking when they tried to drive in their country. He was very thankful for our frankness.

Back to the phone call this morning. “Mr. Schultz, I wanted to let you know that your name was drawn and you won the second prize of two nights on a Greek Island. However, the first place winner already left the country so we are moving you up to first, which is a seven night stay at an exclusive Greek island for four people. We need for you to come here to claim your prize. It will take about an hour. We’ll send over a Mercedes taxi to pick you up.”

There’s an old saying, it must be Greek also, about something smelling fishy. This was beginning to have a bit of an odor, especially that it was going to take an hour for them to explain this prize to us. Thinking quickly on my feet, I said, “Oh sorry, my wife’s asleep. Can you call back in two hours?”

When the lady called back I was ready for her. “Sorry, but we are booked for today and are leaving town tomorrow. Could you please drop off the information and award to us at the hotel?”

No dice. If we couldn’t go there, we wouldn’t win a prize. Hmmm!

Today we wandered the city, visiting museums, museums, museums. How many old broken clay pots can you possibly see in one day? I lost count at about 13,457, which Betinha didn’t find very amusing. 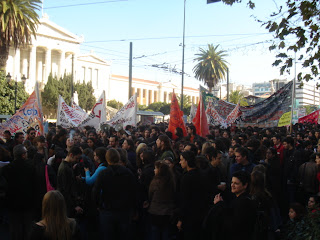 The one bit of excitement was a student protest and march in front of our hotel. They were upset because the government was wanting to allow private universities and not publicly pay for college education. Any time you try to take something away from people that is free, they are bound to be upset. About 10,000 of them were not in a real good mood and marched, chanted and yelled at the riot police. It was kind of exciting when they approached the police line, where the police were lined up behind their Plexiglas shields wearing gas masks. Everything ended peacefully although I had my camera at the ready in case things got out of hand. 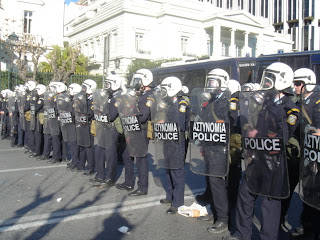 The garbage is piling up on the streets because their only garbage dump is full, we’ve seen all of the museums we need to see and now students are rioting on the streets. I think it is time to get out of Dodge. Or at least I think that I’ve got Betinha convinced that we ought to give it another whirl with me at the wheel. I bought a $10 map and hope that we don’t get too lost, too often. Hopefully, we get a chance to get out into the country tomorrow.


DAY FOUR: Betinha couldn’t figure out how to get our shoes on with toe tags attached, so instead she put stick-on name tags with info about where we were staying, whom to call, etc. on our shirts. But even she had seen enough cracked pottery and was willing to chance driving with me, despite not being able to read the road signs, knowing it would bean adventure.

“We’re going to get lost” was stating the obvious as we left the Hertz counter on our way out of Athens. Betinha obviously had it correctly figured out but it would have helped my confidence a bit if she had kept her thoughts to herself.

We made it out of town without any problems from the directions given to us by Hertz and when we got out into country I opened my new $10 map. It was written in Greek as well as Latin, like that helped a lot!

Somehow we made it to the town we had intended to visit, although not always on the roads you would have normally expected. One promising road quickly became a graveled road which turned into dirt. We pushed on, eventually ending up on another paved road.

Passing wonderfully small farms of grapes, pistachios and oranges on the dirt road, we stopped to look at the view. A nearby elderly farmer and his wife were trimming their grapevines, or rather, it appeared she was trimming and he was supervising. He yelled something to me, which I responded to in my best Clark Griswald impression, “Nice to meet you too! We’re the Schultzs from Effingham, Illinois America. How are you doing?”

There must not be a lot of traffic on that back road. He looked at me and yelled at his wife, who seemed to work a little bit harder.

Unfortunately, we left our guidebook in Athens even though we did have my worthless, expensive map. We visited a number of neat rural towns but discovered we were close to Sparta, although we didn’t know that at the time. The guidebook said that there wasn’t much to see in Sparta, but it would have been interesting to contrast it to the development we saw in Athens.

We made it back to Athens (370 km—200 miles—30 liters of fuel—E25), only having to ask directions one time, much to both of our surprise. Now about Betinha’s insistence that we not drive in Cambodia….

But first we are headed to Doha, Qatar and Dubai, UAE, our Arab countries on this trip.
Posted by BoomtownUSA at 8:55 AM