You’ve got to know that with a name like Oil City, there has to be a story behind the name of the town. And, I was not disappointed as I learned more about the town and its history during my tour. 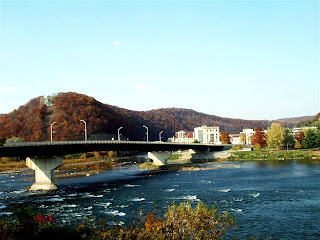 Today Oil City, PA is home to 11,504 residents but its population soared to over 50,000 during its boom days in the 1860s and 1870s when oil was first discovered in nearby Titusville, changing the face of the earth forever. Colonel Edwin Drake discovered oil in August, 1859 and soon oil derricks dotted the countryside.

Stephen Kosak, one of my tour guides told me, “Back then the beautiful rolling hills that you see now were denuded of trees. It was one oil well on top of another.”
Today, most of those oil wells are long gone although there is one that is kept pumping each year as the longest continuously pumping oil well in the world.

Many oil fortunes and companies began in Oil City, PA. Kosak told me, “Three of the Rockefeller Standard Oil Trust Companies started here. The National Transit Building, which has been restored, was the center of oil commerce for decades. Both Quaker State Oil and Pennzoil (Penn Refining Company) had their corporate headquarters here until a few years ago.”

Oil City has probably taken more blows in the past twenty years than any other town I’ve been in. Pennzoil closed the last refinery in town in the early 2000s, taking some excellent paying blue-collar jobs with it. The moving of the corporate headquarters along with the consolidation of three local banks into larger, urban city banks in the mid 90s resulted in thousands of white-collar jobs being lost.

But, the industrial and financial base built upon oil for over a century is also paying dividends for the community and I feel will be the base upon which the next growth in entrepreneurship will take place. There are several specialized alloy steel manufacturers and users along with two of the three leaders in continuous casting technology located in the area.

The scenic river valleys and surrounding hills offer some spectacular outdoor possibilities. The majestic downtown with most of its old, solid buildings intact creates a very unique sense of place. The mayor elect hopes to turn the town’s view back toward the beautiful Allegheny River, a change from how the downtown was developed when the riverfront was primarily industrial. There are bike trails planned that will take you all the way to Washington, DC, a new birding festival and plans for a white water park.

Steve Kosak, who runs the Bridge Builders Community Foundation, a three county community foundation, also manages almost $60 million in permanent trusts set up by old oil families for the betterment of the community.

I was very impressed with the vision and passion of the people that I met in Oil City, in their desire to reinvent themselves as a community. I’m going to want to go back in a few years to see what they turn the community into.
Posted by BoomtownUSA at 5:53 AM

I really think this town with the history is one to watch.

My wife and I stayed at the Arlington Hotel during a few visits to Oil City, and the hotel's location along the Allegheny River was a real treat. We sat on a park bench along the river and watched a blue heron stalking fish in the river. The heron didn't seem to mind our presence. The general area was picturesque and peaceful; our stay was invigorating.

I am originally from Oil City and that is "Home". It was a great city to grow up in. A lot of my family have passed on, but I still love to go back for vacations.